After a smokin’ night one, Dead and Company were back at it for night two with a very special guest in what is their last scheduled gig of the year. Branford Marsalis, jazz saxophonist who is widely considered to be the most respected living U.S. jazz instrumentalist, was Dead & Co’s accompaniment for the second set and encore.

Marsalis is not a stranger to the Grateful Dead catalogue.  Branford jammed with Jerry and the rest of the Dead a handful of times throughout the nineties. Branford was just 29 years old when he joined the Dead at the invitation of Phil Lesh at Nassau Coliseum on Long Island. At 58, Branford is a wiser, richer and more accomplished musician that can jam better than ever.

Bobby and the boys kept the first set nice and loose, setting everyone up for a jazzy second set. For the second set, Branford and Dead & Co treated LOCKN’ to a couple of classic Dead tunes that Branford left his mark on 28 years ago—”Bird Song” and “Eyes of the World.”

Branford came out for the encore as well and bid LOCKN’ fare thee well with Dead & Co for the final time this year with “Brokedown Palace,” “US Blues” and “Ripple.”

Thanks again for Relix, Ben and Jerry’s and Airstream for the free LOCKN’ stream! 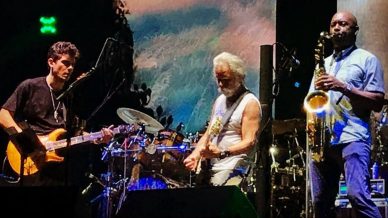