Dead and Company’s return to the stage—their first appearance in a few weeks since the summer tour ended, was the highlight of day 3 at LOCKN’ yesterday. Dead & Co played two sets at the end of a day that included Tedeschi Trucks Band and Foundations of Funk among other acts.

Speaking of the Foundations of Funk, the transformation of The Meters who are celebrating their 50th anniversary, their set included a very special sit-in (at 8:02:00) on “Hey Pocky A-Way” from Bob Weir, John Mayer, Mickey Hart and Bill Kreutzmann. The Dead Meters supergroup continued into the Grateful Dead favorite “Iko Iko.”

Next up was Tedeschi Trucks Band. Their set kicked off with a tribute to the Queen of Soul, with a cover of Aretha Franklin’s “Never Loved a Man.” The rest of the set was vintage TTB with a special sit-in from Ian Neville on “Show Me.” Derek Trucks guitar sounded especially fierce last night!

Setlist (starts at 8:40:50 on the video)
Never Loved A Man (The Way That I Love You)(Aretha Franklin Cover)
Made Up Mind
Do I Look Worried?
Lord Protect My Child (Bob Dylan Cover)
Laugh About It
Don’t Know What It Means
High and Mighty
Idle Wind
A Song For You (Leon Russell Cover)
Bound For Glory
Show Me (Joe Tex Cover) (Featuring Ian Neville)
How Blue Can You Get? (B.B. King Cover)
Midnight In Harlem
The Storm with Whipping Post reprise (The Allman Brothers Cover)

After TTB, the main attraction came on for not one, but two sets—Dead and Company. Bobby and the boys set kicked off at about a quarter of 10:00 PM and went into the next morning.

For the encore, Dead & Co cover The Band’s “The Weight” and then closed the show out with the obligatory “One More Saturday Night.”

Set One [9:42 p.m. – ~10:50 p.m.]
Hell in a Bucket
Scarlet Begonias with Fire on the Mountain fakeout at the end
Brown Eyed Women
Ramble On Rose
Alabama Getaway )) Cassidy
Deal

Thanks again to Relix, Ben and Jerry’s and Airstream for the awesome livestream! 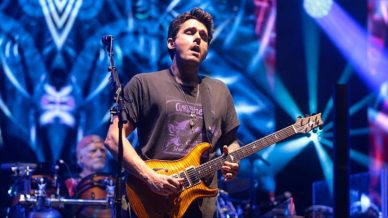 Jam Date: August 25, 2018
Featuring: Dead and Company, Eric Krasno, Foundations of Funk, Lettuce, Tedeschi Trucks Band
Venue: LOCKN'
Songs: A Sing for You, Alabama Getaway, Bound For Glory, Brown Eyed Women, Cassidy, China Cat Sunflower, Deal, Do I Look Worried, Dont Know What It Means, Drums, Fire On The Mountain, Franklin's Tower, Hell in a Bucket, Help on the Way, High and Mighty, How Blue Can You Get, I Know You Rider, Idle Wind, Laugh About It, Lord Protect My Child, Made Up Mind, Midnight in Harlem, Never Loved a Man, One More Saturday Night, Ramble On Rose, Scarlet Begonias, Show Me, Slipknot, Space, The Other One, The Storm, The Weight, Wharf Rat, Whipping Post
Hey-I got something to say!