Dead and Company’s latest stop on their 2017 summer tour was right out side of Washington D.C. in Bristow, VA. This marks the second summer Dead and Co has played at Jiffy Lube Live.

Senator, former Saturday Night Live cast member and most importantly, Deadhead Al Franken took in the show and hung out with the boys backstage during the set break. Maybe the presence of Senator Franken and the proximity to D.C. compelled Bobby and the Company to close out the show with “US Blues,” “US Blues (reprise)” > “Liberty.” Another theme in the show emerged in the first set with the run of “Althea,” “Peggy-O” and “Bertha.” Dead and Co put a exclamation point on the ladies’ themed set with “Man Smart, Woman Smarter.”

Another treat in the second set was John Coltrane’s “A Love Supreme” out of space.

Thanks to taperjeff for another excellent recording from this summer tour. 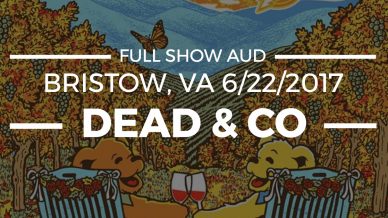