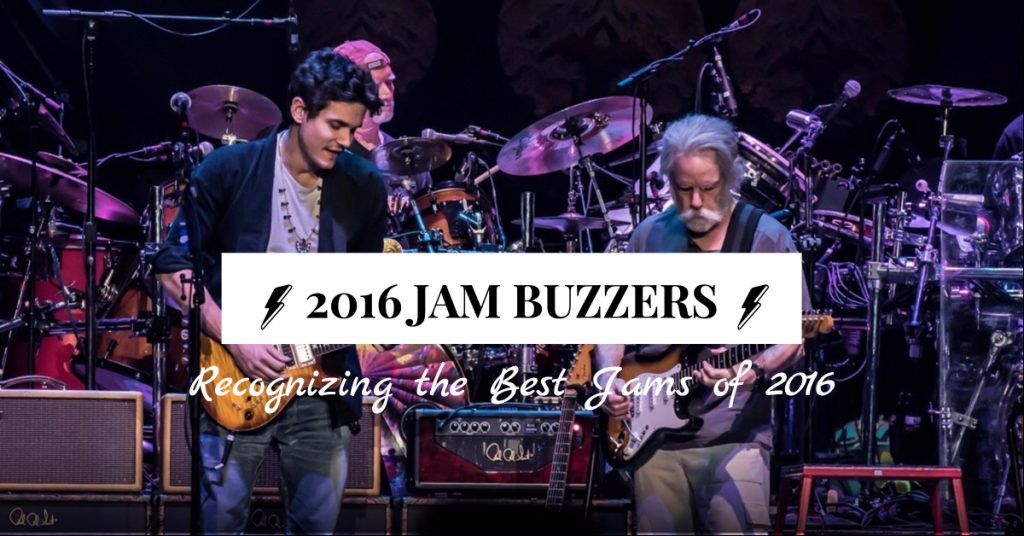 I started Jam Buzz nearly one year ago as a way to connect to and share the live music I love. It turns out that a lot of you love seeing and listening to the same shows!

In addition to sharing great music, you and Jam Buzz were able to raise $386 for charity!

To mark a year of great music, I’m introducing the first annual JamBuzzers. The JamBuzzers recognize the best live music from the last year. The panel of judges for this year’s JamBuzzers consists of one member – me! So if you don’t like a selection, send your gripes and rants to chris@jam.buzz 😜

Without further ado, here are the 2016 JamBuzzers!

Show of the year: My Morning Jacket at LOCKN’

People were surprised, skeptical and a little curious about My Morning Jacket appearing in LOCKN’s 2016 lineup. MMJ doesn’t usually play the jam band festival circuit, and it’s probably safe to say that there were plenty of first time listeners in the crowd.

Jim James and My Morning Jacket answered all questions about why they were at LOCKN’ with the year’s best show. The career-spanning show was simply amazing. I could shower it with a ton of praise, or you could just listen for yourself and see why it earned this year’s top honor.

Sit-in of the Year: Bob Weir with Phish in Nashville

With sit-ins being one of my favorite type of jams to share here on Jam Buzz, there were a lot of memorable collaborations to choose from for the best sit-in of 2016. In the end, there wasn’t really any doubt that Bob Weir playing with Phish was the best of them all. Bobby and Phish’s paths crossed in Nashville in the fall. The sound check confirmed the rumors – Weir was going to play some tunes with the P-fish.

What made this sit-in so memorable was that Bob didn’t sit in for just a song or two, but six! The hour-long historic collaboration easily sits atop the best sit-ins for 2016.

Best Tour of the Year: Dead and Company

This is sure to rile up a few deadheads, but Dead and Company is one of the best, /if not the best/, post-Jerry Grateful Dead bands. While the absence of Phil doesn’t go unnoticed, Oteil Burbridge is an absolute beast on the bass. Jeff Chimenti, the unsung hero of the group, gives any Grateful Dead keyboardist a run for his money. Bobby and the rhythm devils (Billy and Mickey) are sounding the best they have in decades. And then there is John Mayer. While Dead and Company debuted in 2015, Mayer truly didn’t earn his stripes until this summer tour. Whether you dig his sound or not, his dedication to his craft and the Grateful Dead legacy is unmistakable.

Their entire 2016 summer tour was gold. Their first show at Fenway is as good as any place to start.

Listen to more of the 2016 Dead and Company tour.

Best Run of the Year: Tedeschi Trucks Band at the Beacon

Following in the footsteps of the Allman Brothers Band, Tedeschi Trucks Band has begun an annual residency at the Beacon Theater in NYC. Their 6-show run this past October was jam-packed with guests like Warren Haynes and Luther Dickinson. Each night built on the energy from the performance before. One of my favorite moments of the run was Dickinson’s sit-in for an epic 18-minute “In Memory of Elizabeth Reed.” Good to see Trucks still peakin’ at the Beacon in 2016!

Holly got her start before 2016, but spread her wings when she started to reinterpret Grateful Dead songs. Originally known for her Phish piano compositions, Holly not only added the Dead to her repertoire in 2016, but also jammed with Phil Lesh and Bob Weir on more than one occasion. One of my favorite Holly Bowling performances of 2016 was her drum-less happy hour jam session with Phil Lesh at Terrapin Crossroads.

With so many musicians leaving us in 2016, there was no shortage of musical tributes to Bowie, Prince, Cohen, Russell and so many more. The most anticipated and this year’s selection for Best Tribute Set of the Year goes to Phish covering David Bowie’s The Rise and Fall of Ziggy Stardust and the Spiders from Mars.

Musician of the Year: Bob Weir

Bob Weir may be 69 years young, but he regained his stride in 2016. Having to cancel his tour a couple of years ago, there was fear that we had seen the last of Bobby out on the road. Weir alleviated any fears and then some in ’16.

The “Summer of Bob” phrase was used a lot on Jam Buzz in 2016. The summer 2016 Dead and Company tour, sit-ins with Paul McCartney, Dave Matthews and Phish, releasing his first album in forever, his campfire tour and his appearance at Warren Haynes’ Christmas Jam were just a few of the many highlights of Bob Weir in 2016. Here’s to an even better year in 2017!

Best Jam of the Year: Oteil Burbridge’s Otherworldly “Eyes of the World” Jam at the Gorge

Oteil’s bass work with Dead and Company this past summer was incredible. His playing on the “Eyes of the World” at the Gorge was out of this world, probably because he was in another dimension. Oteil went for the “full Grateful Dead experience” that night and conducted an acid test of his own. Needless to say, he aced the test.

His bandmates didn’t know what got ahold of him that night at the Gorge. “I’ve been chasing John and I caught his ass that night and he knew it. Afterwards, he sat Bill and me down and was like, ‘What happened? What is this all about?’ It was hilarious. I was like, ‘Yeah I got you.’ And I connected to the audience. I felt like an octopus with tentacles connecting to each person in the band—and each person on that vibe in the audience. And it was heavy,” Oteil said of the performance

Watch Oteil the Octopus crush “Eyes of the World” and give Dead and Company a run for their money.

Festival of the Year: LOCKN’ Festival

There are no shortages of great jam festivals. Since Bonnaroo arrived on the scene back in 2001, the music festival has enjoyed a renaissance. While some say the bubble has popped, there are dozens of top-notch festivals to see our favorite acts at every spring, summer and fall.

A relatively new festival, LOCKN’ has quickly become the jam festival to go to. This past year’s festival was a prime example. My Morning Jacket’s incredible show, Ween, Phish and Phil Lesh and Friends were some of the highlights. The quality acts didn’t end with the headliners though. Some of LOCKN’ 2016’s best performances happened after midnight like Joe Russo’s Almost Dead and Circles Around the Sun. My favorite LOCKN’ 2016 moment was JRAD’s opener on 8/25. As they emerged from a freeform jam, an absolutely blistering “Truckin’” set the stage for the rest of the show.

There were so many amazing New Year’s Eve shows to ring in 2017, but the most amazing moment occurred at Madison Square Garden in New York City.

To open up the second set, Phish launched into one of the more popular numbers off their latest release, “Petrichor,” as dancers in raincoats, suits and umbrellas graced the stage. It soon became apparent what the umbrellas were for as rain poured down on the stage. The choreographed umbrella dance gave way to the umbrellas floating above the stage like jellyfish.

As “Petrichor” came to a close and Trey started the countdown, it looked like Phish’s gag had been revealed. Then as the boys broke into “Auld Lang Syne,” recorded cat and dog noises broke out in MSG and inflatable cats and dogs rained down on the stadium. It was literally raining cats and dogs!

Tapers of the Year: Z-man, Lazy Lightning and Sean Roche

With such a wealth of incredible music at our fingertips nowadays, it’s easy to forget the fans who capture all the footage and recordings. I wanted to thank and recognize the kick-ass tapers out there for their strong and steady arms and the late nights they pull to get us their recordings ASAP.
Jam Buzz has featured recordings and footage from dozens of sources. While I’m grateful to all of them, there were a few that stuck out and deserved special recognition.

Z-man
There isn’t a week that goes by that Z-man doesn’t put a top-notch recording on bt.etree.org. I’ve spent many, many hours enjoying Z-man’s recordings this past year. One in particular was Phish in Nashville with Bob Weir sitting-in.

Lazy Lightning and his 4k footage of Phish (and plenty of other bands) have graced many pages of Jam Buzz. One of my favorite clips of his was the footage of Joe Dart going beast mode on “Beastly” at LOCKN’.

If there was a Mule or Tedeschi Trucks Band on the East Coast, I could count on Sean to have footage up on YouTube before breakfast the next morning. Check out his footage of “Purple Rain > All the Young Dudes (Reprise)” from Mules Years Eve.

Thanks to all the Jam Buzz viewers and subscribers for a great 2016. I look forward to sharing another great year of jams with you in 2017!

Did I miss any of your favorite jams? Let me know at chris@jam.buzz or in the comments below.