So technically the late-nite Lettuce set at LOCKN’ was already posted a couple of days ago, but got buried under the coverage of Dead & Co and Tedechi Trucks Band’s sets. If you want to watch the action, by all means go to LOCKN’ day three recap and fast forward to 14:19:15.

After remarkable sets from Tedeschi Trucks Band and Dead & Co, funk-masters Lettuce kept the party going late into the morning on Sunday at LOCKN’. The set, orchestrated by Peter Shapiro featured Erick “Jesus” Coomes on bass, vocals, Adam Deitch on drums, Adam “Shmeeans” Smirnoff on guitar, Ryan Zoidis on saxophone, Eric “Benny” Bloom on trumpet, vocals, Nigel Hall on keyboards, vocals and Eric Krasno on guitar, vocals. Lettuce was billed as providing a Jerry Garcia Band tribute and boy did they come through.

The set featured a ton of JGB classics and rarities including one of my favorites, “Finders Keepers.” Lettuce welcomed Dead & Co bassist out for an insane take of “Stop That Train” before John Mayer joined for a face-melting “After Midnight.” Mayer stayed out for the remainder of the set and was joined by Bob Weir for “Sugaree,” “Tangled Up in Blue,” “That’s What Love Will Make You Do,” and “How Sweet It Is to Be Loved By You.”

Mayer closed out the set with Eric Krasno and the rest of Lettuce with covers of “Cats Under the Stars” and “They Love Each Other.” When it was all said and done, the jam-heavy late-night set clocked in at nearly two hours! Other guests during the set included Kofi Burbridge on keyboards, Alicia Chakour on vocals and Mark Rivers on vocals.

Thanks to VIBE JUNKIE RADIO ~ upful LIFE for the stream! 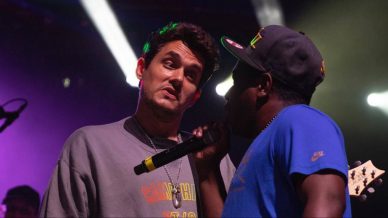 Jam Date: August 25, 2018
Featuring: Alicia Chakour, Bob Weir, Eric Krasno, John Mayer, Kofi Burbridge, Lettuce, Mark Rivers, Oteil Burbridge
Venue: LOCKN'
Songs: After Midnight, Cats Under the Stars, Finders Keepers, How Sweet It Is To Be Loved By You, I Second That Emotion, Stop That Train, Sugaree, Tangled Up in Blue, That's What Love will Make You Do, They Love Each Other
Hey-I got something to say!