Coming off their anticipated tour opener on the Summer Stage in Central Park, Gov’t Mule’s spring and summer tour is full steam ahead. Their second stop was last night in Upper Darby (outside of Philadelphia) at the famed Tower Theater. As with the NYC show, Chris Robinson Brotherhood opened the show.

While Chris Cornell (former frontman for Soundgarden and Audioslave) didn’t have a whole lot musically in common with Mule, his suicide earlier this week rattled the entire rock world. At 52 years young, Cornell still had so much to give, but his mark on rock music will last for years. Warren and Mule have been known to cover a wide range of genre’s including the occasional 90’s grunge song. Mule took a moment early in the first set to bust out the second only cover of Soundgarden’s hard-hitting “Fell on Black Days” to honor Cornell.

To close out the first set, Gov’t Mule welcomed Chris Robinson and Neal Casal from Chris Robinson Brotherhood. Neal and Chris gave Mule more than ample firepower to tackle The Black Crowes’ classic “Sometimes Salvation.” Earlier in the week, Chris Robinson let his mouth run on the Howard Stern show and specifically took aim at John Mayer and his brother Rich Robinson. Chris took issue with Rich Robinson’s new band Magpie Salute for being a “Black Crowes cover band.” The “Sometimes Salvation” sit-in with Mule was an interesting song choice for Robinson to cover given his comments from just a few days ago.

For the encore, Mule broke a little from tradition and only Warren and Danny Louis came out. The pair did a beautiful rendition of Leonard Cohen’s “Hallelujah” before welcoming out Abts and Carlsson for the gritty tune off the new album, “Dark Was The Night, Cold Was The Ground.” The Blind Willie Johnson cover was the concert debut for Mule. I’m looking forward to this being a regular in future Mule shows.

Here is some footage courtesy of Sean Roche. Check out his channel for more footage form the show.

Dark Was the Night, Cold Was the Ground

Encore
Hallelujah ^
Dark Was The Night, Cold Was The Ground &

Thanks to Alex Leary for the great recording! 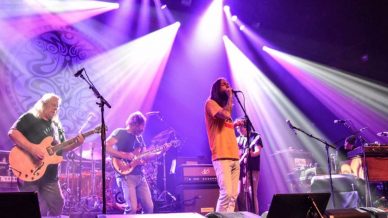