Gov’t Mule is celebrating their 20th anniversary this year, but they are a much different band than they were back in the 90s. The Mule started out as a power-trio with Warren, Matt Abts and former Allman Brothers Bassist, Allen Woody. While Warren’s guitar and vocals were still front and center, Woody’s bass (and Abts on the drums to be fair), played such an important role. Mule concert staples like “Thorazine Shuffle” and “Blind Man in the Dark” were opportunities for Woody to shine. Woody-era Mule is raw and timeless.

Needless to say, when I saw this new un-released recording pop-up on eTree, I was excited. The recording is excellent. Although the bass is a little low in the mix, this is a great example of Mule as a power-trio.

Setlist:
Hammer And Nails
Rocking Horse
Mule
I’ve Been Working
Who Do You Love?
Mule
Chat
Life Before Insanity
She Said, She Said
Tomorrow Never Knows Jam
Don’t Step On The Grass, Sam
Devil Likes It Slow
Thorazine Shuffle
Blind Man In The Dark
Drums
Jam
Blind Man In The Dark
Lay Your Burden Down
Bad Little Doggie
I Believe To My Soul
Madman Across The Water
Thanks & Band Intros

Encore
Out Of The Rain

Thanks to Steve Hagar for the recording and Dennis Orr for the mastering. 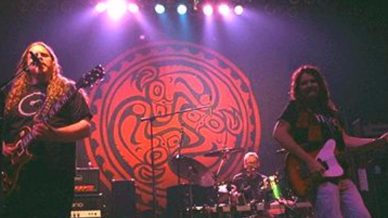 Jam Date: October 25, 1999
Featuring: Gov\'t Mule
Venue: Huntridge Theater
Songs: Bad Little Doggie, Blind Man In The Dark, Devil Likes it Slow, Don't Step on the Grass Sam, Hammer and Nails, I Believe To My Soul, I've Been Working, Lay Your Burden Down, Life Before Insanity, Madman Across the Water, Mule, Out of the Rain, Rocking Horse, She Said She Said, Thorazine Shuffle, Tomorrow Never Knows, Who Do You Love
Hey-I got something to say!