Bob Weir has gathered up the Campfire band for another stint of shows this spring before he hits the road this summer with Dead and Company. The Campfire band includes Aaron Dessner, Bryan Devendorf and Scott Devendorf of The National along with Jon Shaw, Josh Kaufman and Steve Kimock.

To open the show, as he had done in Campfire gigs before, Bobby sang three solo acoustic songs. Is there a better way to open a show than with a Bob Weir acoustic version of Dylan’s “When I Paint My Masterpiece”? Weir’s howling on the classic tune will give you chills.

The rest of the band joined Weir for a set of Blue Mountain tunes. The second set was the Dead set. Bobby and his band ran through Grateful Dead originals and common covers like “Althea,” “Friend of the Devil,” “Standing on the Moon” and more. Dallas was then treated to a “Ripple” encore along with one of Bobby’s originals off his new album, “Ki-Yi Bossie.”

Thanks to nakguy for the recording. 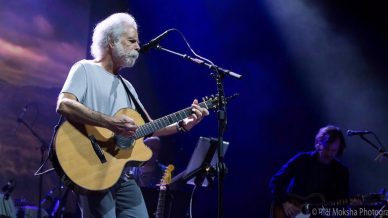