Tedeschi Trucks Band is one of the hardest working bands on tour today. After clocking over 100 shows in 2016, TTB doesn’t show any signs of slowing down in 2017. Since March 17, Derek, Susan and company have been criss-crossing Europe to kick-off their spring tour. Their dates across the pond are coming to an end with the final show in Denmark on April 8th.

There hasn’t has been a lot of footage of recordings of the European dates, so when I saw this recording from their gig in Frankfurt, it was a must-share.

The band is in fine form and despite apparently blowing a couple of amps during the show, Derek still rips. The setlist includes a handful of originals and covers live “Keep on Growing” by Derek and the Dominoes and Joe Cocker’s “Let’s Go Get Stoned.”

Set 1:
Made Up Mind
Do I Look Worried
Midnight In Harlem
Get Out Of My Life Woman >
Keep On Growing
How Blue Can You Get
Let Me Get By

Set 2:
Anyhow My Lord (Spiritual) >
Anyhow
Laugh About It >
Bound For Glory
Get What You Deserve
Don’t Think Twice, It’s Alright
Don’t Know What It Means >
The Storm

Thanks to msp_mule for the recording. 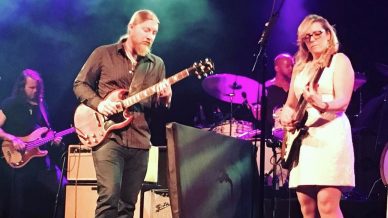 Jam Date: April 3, 2017
Featuring: Tedeschi Trucks Band
Venue: Batschkapp
Songs: Anyhow, Anyhow My Lord, Bound For Glory, Do I Look Worried, Don't Think Twice It's Alright, Dont Know What It Means, Get Out of My Life Woman, Get What You Deserve, How Blue Can You Get, Keep on Growing, Laugh About It, Let Me Get By, Let\'s Go Get Stoned, Made Up Mind, Midnight in Harlem, The Storm
Hey-I got something to say!