Joe Russo’s Almost Dead had a pair of runs at the Brooklyn Bowl last month where Oteil Burbridge (of Allman Brothers Band and Dead and Company fame) filled in for Dave Dreiwitz who was fulfilling his obligation as lead bassist for Ween. Because of Oteil’s deep knowledge of the Dead catalogue and his uncanny ability to jam with whoever, wherever, there was instant chemistry.

The 3/16 show also featured the welcome addition of Stuart Bogie on horns & percussion. The added horn element gives the electric JRAD show a little something extra. As far as setlists go, this show features some old school Dead jams like “Dark Star,” “St. Stephen,” and “The Eleven.” And as with all JRAD shows, the boys manage to tease tunes like Michael Jackson’s “Don’t Stop Til You Get Enough” and other out of left field covers like Stephen Malkmus & The Jicks’ “Cinnamon & Lesbians” and Lorde’s “Royals.”

You want to hear why I love JRAD so much? Check out “Truckin'” towards the end of the second set. After nearly three hours of playing, Joe Russo and the boys give the classic tune everything they got and then some.

Thanks to Eric McRoberts for the awesome SBD matrix! 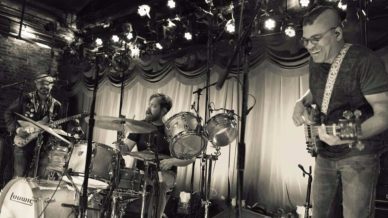