The next stop on the We Will Get By Streaming Tour brings us to the summer of 1976. On July 12, 1976 the Dead kicked off a six night run at the Orpheum Theater in San Francisco. These six shows would be the only they would play in July.

As a rare treat, the soundcheck was recording and filmed unbeknownst to Jerry and the rest of the Dead.

As for the show itself, checkout the “Minglewood Blues” bust-out, a great version of “Lazy Lightning > Supplication,” the “China Cat” teases during “Franklin’s Tower,” and a beautiful “Wharf Rat.”

Thanks to Jonathan Aizen for the recording. 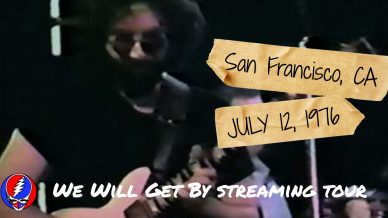