Update: Thanks to mjcarpenter for the recording.

After a warm-up gig that arguably showed Dead & Co with a few cob webs to dust off, Bob Weir and the boys were at MSG to officially kick off their 2017 Fall Tour. A couple days of rest and practice payed off. Dead and Company’s first of two shows at MSG was a barn-burner.

The action got started with a “Shakedown Street” and Dead and Co didn’t turn the dial down the entire night. Bobby came out sporting new glasses and a voice that can still bring a deadhead to their knees. Mayer’s guitar was blazing and the rest of the band sounded in tip-top shape.

Other highlights included a gorgeous “Standing on the Moon,” “Terrapin Station” and “Bertha” among many others. Thanks to Sean Roche, Matt Frazier and btragal for the footage!

They Love Each Other

Standing on the Moon

Set 1:
Shakedown Street > Greatest Story Ever Told
Bertha
Cassidy
Beat It On Down the Line
They Love Each Other
Cumberland Blues
Set 2:

China Cat Sunflower > I Know You Rider
Ship of Fools
Terrapin Station > Drums > Space > Standing On the Moon > The Other One
Casey Jones
E: Samson & Delilah
E2: Werewolves of London

After the Band Together performance in San Francisco, Mayer went to Instagram to share that he thinks Dead and Company is “about to begin what I believe in my heart will be the best tour so far for @deadandcompany.” 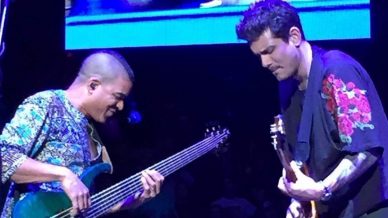 Jam Date: November 12, 2017
Featuring: Dead and Company
Venue: Madison Square Garden
Songs: Beat it on down the line, Bertha, Casey Jones, Cassidy, China Cat Sunflower, Cumberland Blues, Drums, Greatest Story Ever Told, I Know You Rider, Samson and Delilah, Shakedown Street, Ship of Fools, Space, Standing on the Moon, Terrapin Station, The Other One, They Love Each Other, Werewolves of London
Hey-I got something to say!