UPDATE: Thanks to Chris Hecht for the recording!

Melvin Seals and JGB (Jerry Garcia Band) have carried on the great music and spirit of the Jerry Garcia Band for the decades since his passing. Melvin invited a couple of friends to join JGB for a very special occasion this past weekend at the Warfield in San Francisco.

The Warfield was practically a second home for Jerry Garcia. Jerry amassed over 100 shows at the historic theater between Grateful Dead and Jerry Garcia Band gigs. Melvin Seals and JGB celebrated Jerry’s legacy at the Warfield by recreating the May 5th, 1988 Jerry Garcia Band show. Oteil Burbridge, Stanley Jordan and Dave Ellis joined the JGB line-up for some added firepower.

Among the JGB the Dead classic played were “Eyes of the World,” “Stella Blue,” “Don’t Let Go,” “To Lay Me Down,” and “Get Out of My Life Woman.”

Eyes of the World

To Lay Me Down

Get Out of My Life Woman

Thanks to Ted Silverman for the footage! 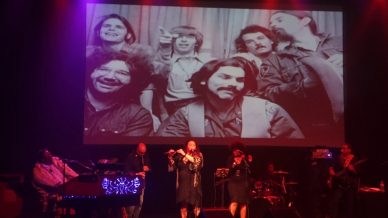 Jam Date: May 5, 2018
Featuring: Dave Ellis, Melvin Seals and JGB, Oteil Burbridge, Stanley Jordan
Venue: Warfield Theater
Songs: Cats Under the Stars, Deal, Don't Let Go, Evangeline, Eyes of The World, Franklin's Tower, Get Out of My Life Woman, Help on the Way, How Sweet It Is, I Shall Be Released, Like a Road, Lucky Old Sun, Midnight Moonlight, Mission in the Rain, My Sisters and Brothers, Parrish Rap, Run for the Roses, Shining Star, Stella Blue, Think, To Lay Me Down
Hey-I got something to say!