As Jazz Fest was in full swing earlier this month, there were a slew of late night shows during and in-between the festival weekends. The Maple Leaf Bar is home to some of the best late night shows in the city.

A week ago today, an all-star cast assembled to pay tribute to the late Col. Bruce Hampton who tragically died during his 70th birthday concert last year. Despite the Maple Leaf’s tiny stage, there were tons of musicians who showed up to pay tribute to the iconic jam legend. The house band included Duane Trucks, Dave Schools, Kofi Burbridge, and Jake Eckhart and the guest list was equally as impressive: Brandon “Taz” Neiderauer, Marcus King, Papa Mali, Eric McFadden and Ryan Zoids.

The setlist may appear short, but the jams were long and went into the wee hours of the morning. Songs ranged from WSP favorites to classic blues standards like Howling Wolf’s “Smokestack Lightning” and “Spoonful.”

Thanks to picklemic for the great SBD recording! 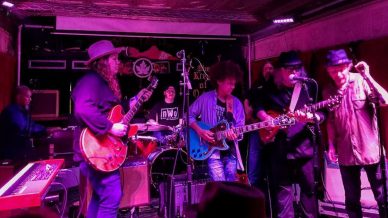