What do you get when you mix members of Little Feat and the Grateful Dead extended family? Dead Feat! The supergroup composed of Little Feat’s Paul Barrere, Fred Tackett and Kenny Gradney, as well as Jackie Greene, Jason Crosby and Wally Ingram plays annually in New Orleans.

This past weekend, Dead Feat played their first show outside of NOLA at the Alpine Valley Resort in East Troy, WI. Billed as a Dead and Company pre-show, the party got started around 2 in the afternoon. The sizable crowd was treated to not only gorgeous weather, but also two smokin’ sets of Little Feat and Grateful Dead tunes.

For a band that only plays occasionally together, they sure seemed road worthy! Check out the three lengthy jams to kick off the second set—”Shakedown Street,” “Spanish Moon,” “Sugaree.”

Thanks to Tim “Flip” Ruberg for the PHENOMENAL recording! 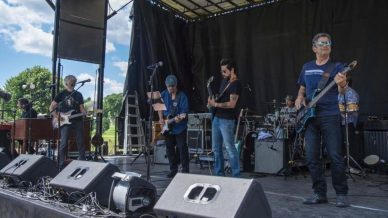