Watch Kung Fu and a ton of guests including Phish drummer Jon Fishman, Dead & Co.’s Oteil Burbridge, String Cheese Incident’s Jason Hann, Trey Anastasio Band’s Natalie Cressman, Kat Wright, and DJ Logic play a “Get Out And Vote… For Bernie” benefit concert a couple of nights ago at The Hall At MP in Brooklyn on Sunday night.

While Brooklyn was definitely feeling the Bern a couple of nights ago, they weren’t at the polls yesterday with Clinton beating Sanders easily in the NY primary.

Regardless, the show was a real treat for those in attendance and you, thanks to this pro-shot video feed of the night’s festivities!

Funk band Kung Fu, started off the night with Living Colour’s “Cult Of Personality” and kicked off two sets of awesome covers. Kung Fu was joined by guests later in the first set and played covers by Frank Zappa, Jimi Hendrix, Grateful Dead, The Beatles and more. Most, if not all the songs had a political undertone to them (The Beatles’ “Revolution” and Bob Marley’s “Burnin’ & Lootin'”) and the band sprinkled shout-outs to go vote and other political references throughout the show.

Even if you aren’t feeling the Bern, the show is definitely worth checking out! 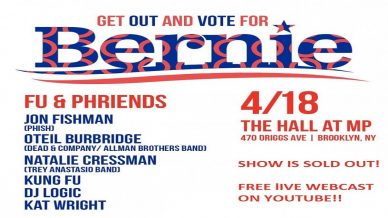