Dead and Company continued their march up and down the east coast last night in Saratoga at the famed Saratoga Performing Arts Center. The venue was home to a killer Dead and Company show a year ago today.

For those of you that live on the west coast, the east coast has been soaked this spring. The rain continued last night at SPAC just as “Looks Like Rain” started echoing through the venue, but cleared way for a beautiful rainbow during the show.

Johnny “Jean Jacket” Mayer was on fire last night, especially on “Deal”—about as good a guitar solo from Mayer as you are going to hear.

Other highlights include Oteil singing on “China Doll,” “Terrapin Station,” tour debut of “All Along the Watchtower” and “I Know You Rider” out of “Black Peter.” Really just a stellar second set.

In addition to the full show audio, here are a few videos courtesy of our man Sean Roche.

Thanks to Bill Goldberg for the recording! 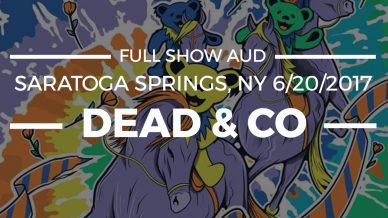