While Dead and Company was melting faces at Bonnaroo, Phil Lesh and Friends played the decidedly more laid back Terrapin Crossroads venue but still put on a hell of a show.

Phil, proprietor of Terrapin Crossroads has created a training ground for the next emissaries of the Dead’s music. This round of students included Teresa Williams, Larry Campbell, Luther Dickinson, Cody Dickinson, and Jason Crosby. Most notable are the Dickinson brothers who make up the better part of the North Mississippi Allstars.

In an unusual move, Phil played with this group of friends for the first two sets and then brought out a second line-up for the next set. The third set was from one of Phil’s favorite 1988 shows and unfortunately hasn’t surfaced…. yet.

Thanks to Quinkfolk for the recording. 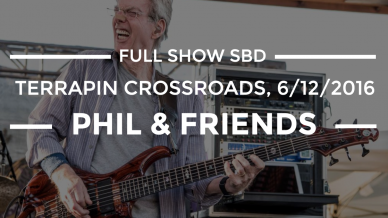