Phil Lesh and Friends finished up their three night run at the Capitol Theater last night. As Z-man said, the line-up grew in strength every night and really started to gel by the end of the run.

In addition to plenty of Dead tunes, Phil and the gang covered Traffic’s “Dear Mr. Fantasy,” Bob Dylan’s “All Along the Watchtower” and Jimi Hendrix’s “Little Wing.”

While John Kadlecik is a familiar face and sound on stage, Stanley Jordan might not be to a lot of Deadheads. The prodigious jazz guitarist has been on the scene since releasing his first album back in 1982. Jordan’s style of guitar playing is like no other. Instead of picking or strumming, Stanley uses a two-handing tap touch technique that really needs to be seen. The result is a soft but masterful sound.

For the final night of the run, the Cap was bathed in beautiful Phil Lesh themed art and photos. The artwork was projected on the walls of the theater.

Thanks to Z-Man for the great recording. 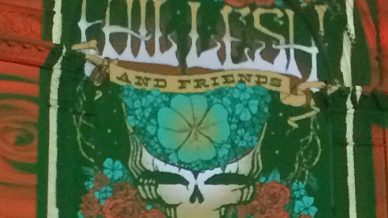