After a stint on the NJ shore boardwalk with Holly Bowling, Tom Hamilton reunited with Joe Russo and some new faces for Joe Russo’s Almost Dead. Jon Shaw subbed for Dave Dreiwitz on bass who is still on tour with Ween and Dead and Company keyboardist subbed in for Marco Benevento.

JRAD shared the bill with Infamous Stringdusters & Funky Meters among other acts. You could call the show a warm-up for the two-night run at the Capitol Theater JRAD is kicking off this weekend, but the set with Chimenti on keys was straight fire.

According to Peter Costello’s box score from the show, there was plenty of teases, but the comments revealed some Hendrix tucked in there along with “The Wheel” teases. Give it a listen and see if you can spot anything he missed.

Encore
Not Fade Away $

Entire show with Jon Shaw on bass & Jeff Chimenti on keys subbing for Dave Dreiwitz & Marco Benevento, respectively. (First time that has happened.)
@ – With a short Slipknot! Jam in between the 2 songs
# – Verse One Only, Unfinished
$ – With a Ruben & Cerise Tease & a Feel Like A Stranger Tease (TH & TH/Band, respectively)
% – AKA the “usual” instrumental ending, no lyrics were sung
^ – With another Ruben & Cerise Tease (TH)

ThanksThanks to nico11104 for the recording & photo. 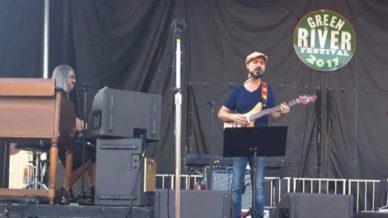