Tedeschi Trucks Band’s Wheel of Soul tour steamrolled into Atlanta last Saturday night. The tour is about halfway down and has been spectacular thus far. While not technically their home, the Atlanta show was something of a homecoming for Derek Trucks and his band. It marked their first time that he and his bandmates had played the Fox Theater since his good friend Col. Bruce Hampton passed away on stage at his 70th birthday show.

Col. Bruce was honored with the encore tune “Cry Me a River” right after TTB dedicated the first encore tune, “Song for You” to their bandmate Kofi Burbridge who is recovering from a massive heart attack earlier this spring. While not formally mentioned by the band, Gregg Allman was also on everyone’s mind during the “Little Martha” intro to “Midnight in Harlem” and the “Whipping Post” final chorus and jam out of “The Storm.”

As with other shows this tour, Wheels of Soul openers The Wood Brothers and Hot Tuna sat in on some songs during Tedeschi Truck Band’s set. Hot Tuna’s Jorma Kaukonen (guitar), Jack Cassidy (bass), and Justin Guip (drums) joined for for “The Sky Is Crying” and Oliver Wood (guitar, vocals), Chris Wood (bass), Jano Rix (keyboards), and Tinsley Ellis (guitar) came on stage for “Have No Shame” and “Sweet Virginia.”

Thanks to D. Fries for the recording. 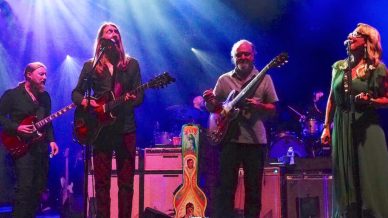 Jam Date: July 15, 2017
Featuring: Hot Tuna, Tedeschi Trucks Band, The Wood Brothers
Venue: Fox Theater
Songs: Bound For Glory, Cry Me A River, Dont Know What It Means, Have You No Shame, I Pity the Fool, I Want More, I Wish I Knew, Keep on Growing, Little Martha, Made Up Mind, Midnight in Harlem, Song For You, Sweet Virginia, The Sky is Crying, The Storm, Whipping Post, Will the Circle Be Unbroken
Hey-I got something to say!