While Dead and Company’s second show at Fenway with the acoustic “Dark Star” was probably the show of the summer, their first night at Fenway was quite outstanding as well.

John Mayer, Oteil Burbridge and Jeff Chimenti all may be new blood in the Dead’s line-up, but they’ll never forget where they came from. On 6/17/1972, founding member of the Grateful Dead, Ron “Pigpen” McKernan played his last show. On the anniversary of Pigpen’s last show, Dead and Co paid tribute to the old bluesman with “Big Boss Man” and a picture of him on the big screens.

John blew everyone away on “Sugaree” as usual. His guitar jams always seem to reach a new place and give you that “wow” feeling. On viewing Mayer’s evolution in Dead & Co, one Redditor put it best on the setlist thread:

Set 2
Dancin’ in the Streets
Help on the Way >
Slipknot! >
Estimated Prophet >
Eyes of the Word >
Jam >
Drums >
Space >
Eyes reprise >
I need a Miracle >
Standing on the Moon >
Franklins Tower

Thanks to nickspicks for the great recording! 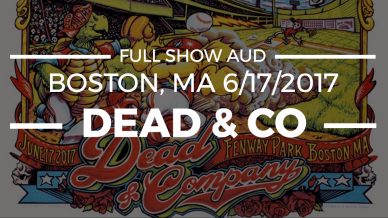