Dead and Company is chugging along on all cylinders and pumping one amazing show after another this summer tour. For me, I think this second show at Fenway was the pinnacle of the tour so far. The only thing missing from the show was Johnny’s checkered outfit from last year’s Fenway show.

Unless are living under a rock, you have heard by now that Bobby and the boys busted out a historical acoustic version of “Dark Star.” On Facebook and Reddit, there was been a lot of back and forth on whether this was the first ever acoustic “Dark Star” or not. From what I can gather, the Grateful Dead never did an acoustic version, but Bobby did a handful of times with Ratdog, the Weir Robinson Greene trio and other arrangements. Never the less, this was a rare performance and a debut for Dead and Company for sure.

As if the acoustic “Dark Star” wasn’t enough, Dead and Co reprised it, electric style in the second set!

Other highlights include the acoustic “Ripple” to close the first set, a blistering “Truckin'” which has become a staple of Dead and Co shows, Oteil singing lead of “Fire on the Mountain,” Drums featuring Oteil (this guy can do it all!), the “The Eleven” tease out of Dark Star in the second set, Bobby singing a beautiful “Days Between” and a “Brokedown Palace” that will bring you to tears.

Dead and Company has only seven more shows this summer tour. It’s hard to imagine them topping this one, but I wouldn’t put it past them.

Thanks to Jeff Travitz for the excellent recording!

The Fenway posters are up in the Dead and Company 2017 Summer Tour poster gallery! 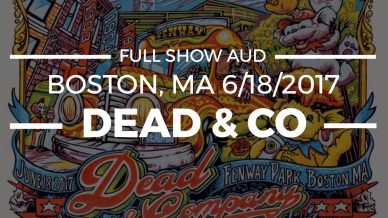