Dead and Company’s fifth tour stop of the 2017 summer tour landed them in Mountain View, CA at the famed Shoreline Amphitheatre. Bobby, John and the boys busted out plenty of tour debuts on night one of two at Shoreline.

Shortly before the show, the news of the terror attacks in London broke and Mayer tweeted that the show last night was dedicated to London.

Walking to stage, sending all my love to London with every note I play tonight.

As the first set unfolded it was clear—Dead and Company has hit their stride. Some of the highlights from the first set include “Viola Lee Blues” and “Here Comes Sunshine.” While a lot of focus is placed on Bobby and John, Oteil and Jeff are emerging as indispensable parts of this band. Oteil finally got his turn at lead vocals last night and Jeff keyboards are becoming a cornerstone of Dead and Company shows.

The second set was really something to behold. The opening “China Cat Sunflower > I Know You Rider, “China Doll,” and “Eyes of the World” was incredible. Things started to get weird during “Drums > Space” when Mickey started playing the … clogs.

Thanks to Jeff Frank for the quick turnaround on the recording! 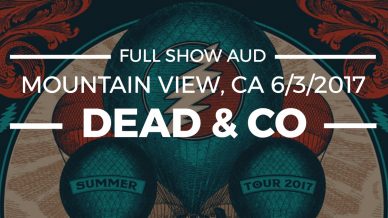