Dead and Company marched down the eastern seaboard to Philadelphia for their third gig of the tour and second city. Last Tuesday’s epic show at MSG proved to not be a fluke as they brought the fire once again to Philly.

The first set was a warm-up to the second set as it was in NYC, but still a great set none the less. Tune’s like “West LA Fadeaway” set the vibe for the first set.

Dead and Co didn’t waste anytime busting out the treats in the second set with a monster Dark Star to kick off the set. Johnny Lightning and company picked up the tempo with “Truckin’ > Smokestack Lightning” spilled into a fierce “Deal.” Like “Sugaree” and “Franklin’s Tower,” “Deal” is one of Dead tunes that Mayer has made his own.

The second set ended with a “Going Down the Road Feeling Bad” sing-along before Dead and Company came out for an emotional “Black Muddy River.” One Redditor described it as more of a benediction than an encore.

Next up for Dead and Company is a pair of shows at the TD Garden in Boston. This tour is just getting started, folks!

Dancing in the Streets

Thanks to Toby Gow, Tom F, crg144 and super vince for the footage.

Thanks to the incomparable Keith Litzenberger for the recording! 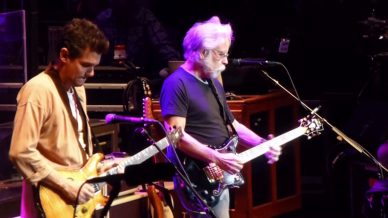