Phil Lesh and his ever changing cast of Friends has been the one constant since Jerry Garcia passed in 1995. Regardless of the line-up, we can count of Phil and Friends to deliver a pair of outstanding Dead sets with some classic rock covers.

In 1999, Phish frontman Trey Anastasio hooked up with Phil for three nights at the Warfield Theater in San Francisco. These three nights culminated in one of the best Phish and Dead crossover moments in history. In addition to Trey Anastasio, the rest of the Friends line-up included Steve Kimock on guitar, Phish member Page McConnell on keyboards, John Molo on drums and Donna Jean Godchaux on vocals for a handful of tunes.

The second night of the run started off with a blazing “Help on the Way > Slipknot > Franklin’s Tower” and never looked back. Trey and Steve Kimock’s guitar chemistry is undeniable.

Thanks to BurningShoreProphet2 for the great footage and soundboard audio! 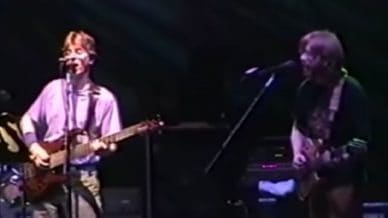