Dead and Company continued marching west with their first of two shows in Boulder. Many flew in for the highly anticipated two night stand, including yours truly. I overheard at a bar that last year’s Dead and Company shows in Boulder were the first concerts at Folsom Field in nearly 20 years. Walking in downtown Boulder and through Shakedown street outside the venue, the energy was palpable.

The opening chords of “Dancing in the Streets” started to echo out as I entered the field—a Dead and Company debut. The party continued with a rocking “Cold Rain and Snow.” Other highlights from the first set included an intense “Althea,” “New Speedway Boogie” and a gorgeous “Ripple.” The first set was fantastic, but the best was yet to come.

As the sun set and the 90+ degree afternoon gave way to cool mountain breezes, Dead and Company opened the second set with “St. Stephen” and what unraveled was an incredible set. “Estimated Prophet” gave away to an awesome “Eyes of the World” that featured incredible solos from everyone including Oteil. Johnny Lightning took over with blazing guitar work on “Deal.” The crown jewel to cap this epic set off was “Morning Dew,” which featured a face-melting Mayer solo.

Thanks to Bennett Schwartz for the awesome recording. I was in the cheap seats and this recording sound so much better than what I remember from last night. 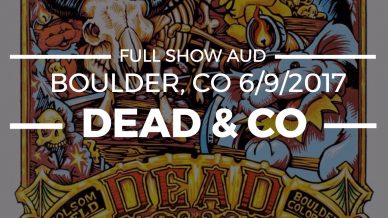