Dead and Company set up shop at Folsom Field for the second night in a row and delivered another incredible show. It was going to be tough to top Friday night’s setlist, but the boys made it happen.

Other highlights from the first set include a beautiful “Friend of the Devil” and a killer “Brown Eyed Women.” Actually, the entire first set was gold.

As with the night before, Boulder was treated to just a jaw-dropping second set. Dead and Co opened set two with a “Help>Slip>Frank” for the ages, followed by a “China Doll” with Oteil on vocals that will give you goosebumps. A delicate but powerful “Stella Blue” spilled out of “Dark Star>Drums>Space.” The set was capped off with “China Cat Sunflower > I Know You Rider” and the obligatory “One More Saturday Night” encore.

Thanks to Bennett Schwartz for the excellent recording! 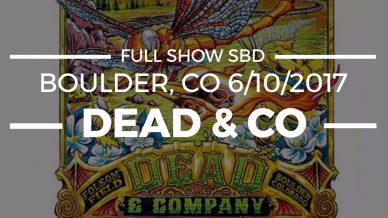