The next stop on the We Will Get By Streaming Tour is Louisville, KY during summer 1990. The Dead played one of the more memorable shows of the tour at Cardinal Stadium on July 6th.

The first set “Sugaree” really gets the party starting. This would be one of Brent’s last shows and he really shines.

The second set opening “China > Rider” got the All the Years Live YouTube series treatment earlier this year. Also, check out the “Standing on the Moon > He’s Gone > Jam” in the second set.

Thanks to Charlie Miller for the soundboard! 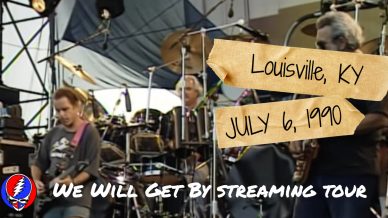