Thanks to vanark for the recording.

Gov’t Mule’s annual Island Exodus took over Runaway Bay, Jamaica this past week. Mule along with Hot Tuna, North Mississippi Allstars and more treated a sold out crowd to four days and five nights of once in a lifetime collaborations on the beautiful Jamaica shores.

On Monday, Hot Tuna who played an afternoon set, joined the Mule later that evening. Jorma Kaukonen, Jack Casady & Justin Guip came out for the second set and joined Warren and company for a pair of covers including “Knockin’ on Heaven’s Door” and “Mr. Charlie.”

Later that evening, Carl Broemel from My Morning Jacket joined Mule for the encore and jammed on Radiohead’s “Lucky” and Dave Mason’s “Sad and Deep As You.”

Thanks to RhymanTube for the footage! 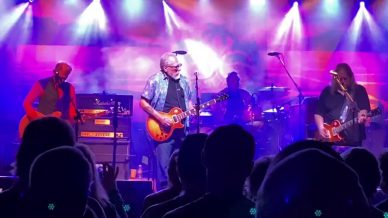