The party really got started last night in the second set when Nicki, Eric, Ron, Neal Evans and Jack Ryan came out to jam with the Mule. After Ron and Neal jammed on “Devil Likes it Slow,” Krasno, Bluhm and Ryan came out for a super funky cover of Rufus and Chaka Khan’s “Tell Me Something Good” (which was originally written by Stevie Wonder – no wonder it’s such a great tune!)

The supergroup moved into a foot-stomping version of another soul classic—Al Green’s “Take Me to the River.” I’m ready to start a petition for Ron Holloway to permanently join Gov’t Mule – every song Ron sits in on is gold!

Marcus King came out for the last couple of songs in the set, including Marshall Tucker Band’s classic “Can’t You See.” Watch the footage below and tell me that song doesn’t sound like it was written for Marcus and Warren.

Set 1:
The 1/8 Island Jam > with Norwegian Wood & Wake Of The Flood teases
Creep
Monkey Hill with She’s So Heavy ending
Whisper In Your Soul
Larger Than Life >
If 6 Was 9 > with Power Of Love tease
Larger Than Life
Tight Rope
Forsaken Savior >
Long As I Can See The Light
Masters Of War >
Rocking In The Free World >
Machine Gun (Instrumental) >
Rocking In The Free World

Thanks to AnneMarie Lewis for the awesome front row stream! 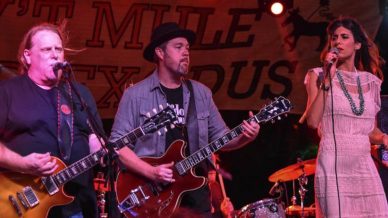