While everyone was trying to figure out what the “gag” was going to be at Dick’s, Phish was busy putting together one of their best shows of the year.

The first set reads like a greatest hits compilation and the second set features the Talking Heads classic “Crosseyed and Painless” to kick it off and then teased in every song of the set. Throw in a drums section where all four members jump of the drums and you have yourself a classic Phish show.

Here is the setlist thanks to Phish.net:

Encore: Walls of the Cave

Although this marks Phish’s end to their summer tour, the boys will be back on the road in about six weeks for a fall tour!

Thanks as always to DrFunkenstein2k for the quick turnaround on the captures! 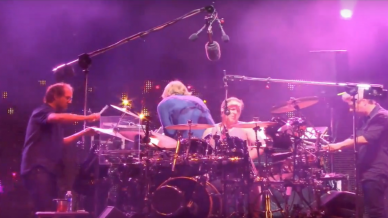