Chris Robinson has not one, but two new projects in 2018. The highly anticipated As the Crow Files tour is set to start in a couple of months and in January, Robinson rallied another new band, the Green Leaf Rustlers for their inaugural tour. The band is comprised of Robinson and Barry Sless (David Nelson Band, Moonalice), bassist Pete Sears (Jefferson Starship, Moonalice, David Nelson Band), drummer John Molo (Phil Lesh Quintet, Bruce Hornsby & The Range) and guitarist Greg Loiacono (The Mother Hips).

The Green Leaf Rustlers’ describe themselves as “From the sage smoke and mists of Marin come your local purveyors of Cosmic Cali country music, playing the dusty country classics of your dreams.” Well okay then.

During their 6-show run in January, Robinson and the Green Leaf Rustlers hit up the Sweetwater Music Hall. Bob Weir, never one to miss out an opportunity to jam with friends at Sweetwater, popped in towards the end of the first set for a few classic tunes. The sit-in included Merel Haggard’s “Mama Tried,” George Jones’ “The Race Is On,” Bob Dylan’s “When I Paint My Masterpiece,” and The Valentinos’ “It’s All Over Now.”

The Race Is On

When I Paint My Masterpiece

It’s All Over Now

Thanks to nowiknowuryder for the footage! 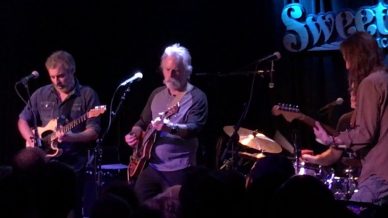 Jam Date: January 19, 2018
Featuring: Bob Weir, Chris Robinson, Greenleaf Rustlers
Venue: Sweetwater Music Hall
Songs: It's All Over Now, Mama Tried, The Race Is On, When I Paint My Masterpiece
Hey-I got something to say!