The above is a playlist of 11 songs from Bob’s concert. Use the controls to access the other songs in the playlist.

Happy belated birthday to Bob Weir! The founding member of the Grateful Dead is still going strong at age 69. In fact some would argue he has never sounded better!

Bob opened the set with an awesome acoustic version of “One More Saturday Night” to a packed Capitol Theater singing him happy birthday. Bobby sang a few more tunes before welcoming the band out for the rest of the show.

Leslie Mendelson came out for a few tunes later in the first set and then again in the second set. Leslie has a very interesting connection to Bob. This is from her bio on her website:

GRATEFUL DEAD GUITARIST BOB WEIR SAW LESLIE’S COVER OF FRIEND OF THE DEVIL AND WAS STRUCK BY THE FRESHNESS AND DELICATE TAKE ON SUCH A VENERABLE CLASSIC. EVERYONE AT TRI STUDIOS IMMEDIATELY STARTED PLANNING ON A SPECIAL WEIR HERE BUILT AROUND HER. THE CHEMISTRY WAS IMMEDIATELY APPARENT AND SHE IS NOW A FULL-FLEDGED MEMBER OF THE TRI ALL-STARS FAMILY. AS BOB SAYS’ “THERE’S A LOT OF MUSIC TO BE MADE TOGETHER IN THE FUTURE”. THE BEST OF WEIR HERE FEATURES LESLIE ON TWO SONGS.

The show was streamed for free courtesy of nugs.net, but if you didn’t get a chance to catch it, don’t worry! There were plenty of cameras in the audience last night.

Thanks to Sean Roche, btragal and William Corcoran for the footage!

Check out the full setlist here. 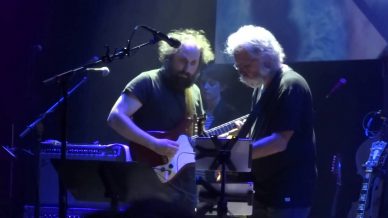