The set was short but oh so sweet. Despite a few technical glitches at the beginning, Bobby’s vocals, guitar playing and spirit shined through beautifully. Halfway through the 7 song set, Bobby welcomed Josh Kaufman who produced Bob’s new album and is a member of The National to the stage for a few tunes.

Bobby being the consummate performer and ready for whatever when on stage, debuted “Only a River” without rehearsal with Josh. In addition to some new tunes off of Blue Mountain, Bobby performed “When I Paint My Masterpiece” and Peggy-O among other staples.

As Weir prepares for his tour this month, this performance shows he is in tip-top shape!

Thanks to Live Nation for live-streaming the show and GratefulLSD for the capture! 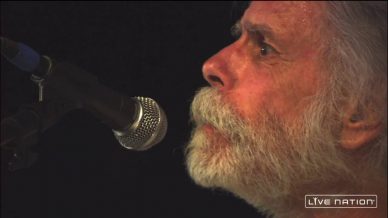