Phish returned for their second of their fourth night of their annual New Year’s Eve Madison Square Garden run last night. Phish didn’t waste anytime the night before busting out Kasvot Vaxt material and last night MSG was treated to a couple of the new songs as well.

The party got started with a very strong “Blaze On” in the first set into Kasvot’s “Turtle in the Clouds.” Trey and Mike didn’t disappoint and reprised the funky synchronized dance while Page took over on the keys.

A second set “Carini” opener is always welcome. Phish didn’t waste anytime getting into the extended second set jams and followed with a 20 minute “Tweezer” into a fiery “Death Don’t Hurt Very Long.” “Tweezer” came back for another 7 minutes before slowing things down with Zeppelin’s “No Quarter.”

Thanks to chocobot for the recording! 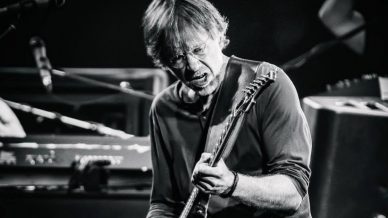