Phish completed their four-night run at MSG last night and brought in the New Year with 20,000 of their closest friends. This is the last time we’ll see the P-fish until their three nights in Mexico in February.

Theories were abound about what Phish’s gag would be for the third set, but a lot of phans had a feeling Kasvot Vaxt would somehow be involved. After two blazing sets, Phish came back for their third set with little fan fair other than Mike and Trey donning tin-foil suits. As Phish kicked off the third set with “Mercury,” large pieces of confetti started to drift on the stage like snow and a series of acrobats lined up across the front of the stage. As “Mercury” raged on, the acrobats were lifted into the air and performed a circ du soleil style performance.

“Mercury” transitioned into “Auld Lang Syne” after the New Years countdown. Amidst the massive ballon and streamer drop, Phish launched into “Say it to me S.A.N.T.O.S.” While the acrobats had everyone’s attention, Mike and Trey were hooked up to cables and during “Say it to me S.A.N.T.O.S.” they lifted off 30+ feet above the stage. I guess this is what space smells like.

Thanks to the Phishrabbi for the the recording. 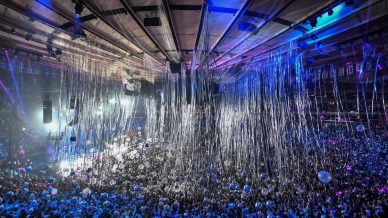