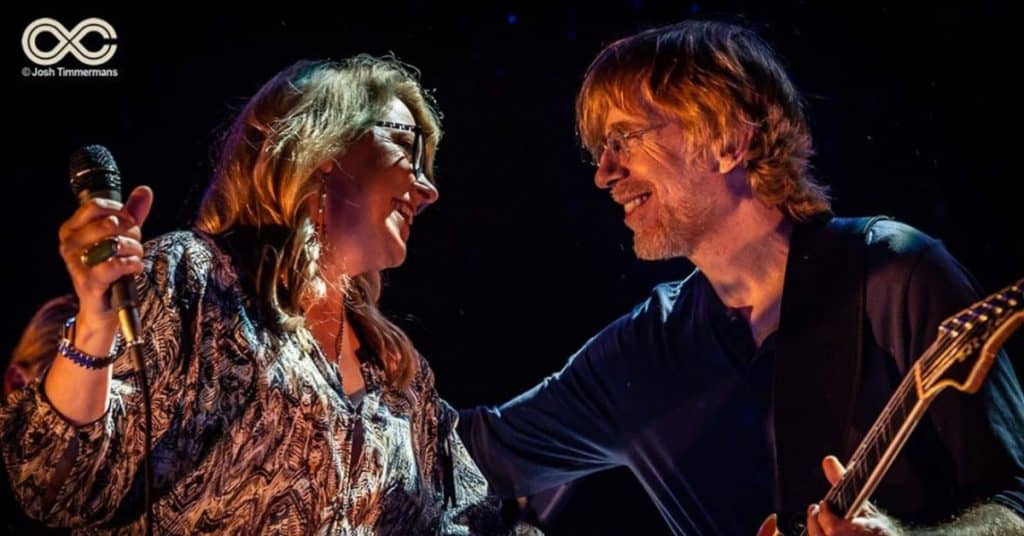 We interrupt the Daily Jam for an important announcement: Jam Buzz is covering LOCKN! Friday, Saturday and Sunday’s posts will be recaps chock full of highlights, once in a lifetime collaborations and of course plenty of tasty jams.

After an action packed day two, my feet were slow to get with the program.

While posting my write-up of Friday’s action in the media tent, I met Ron from Grateful Music and Brian from Deadheadland, both great resources for the Dead community. I also was able to snag one of the iconic Deadheadland shirts!

I missed Cory Henry at the The Porch but caught his brand of funk on display later in the day. Once he hit the main stage, Henry got LOCKN to their feet. His funk Apostles flexed their muscle through an hour of thumping funk. Watch Cory and the Apostles make LOCKN’ testify.

Later in the set, Henry hypnotized the crowd with a killer version of “Stayin Alive.” The cover kept groovin’ and evolving much to the delight of early afternoon LOCKN’ crowd.

Preservation Hall Jazz Band waltzed in next. The NOLA based jazz legends were launching proverbial missiles out of their trumpet, sax and trombones and kept the party rolling.

One of the coolest aspects of LOCKN’ is the rotating stage which makes for the shortest set break transitions in the business. Check out Preservation Hall Jazz Band rotate off and Twiddle rotate on seamlessly.

Twiddle was joined by John Popper midway through the set and was one of the many prefabbed collaborations throughout the weekend. The highlight of Twiddle’s set came when Bob Weir and Eric Krasno joined Popper and Twiddle for the third “Eyes of the World” of the LOCKN’ weekend. Excuse the video—as soon as I heard the magical Eyes chords ring out I rushed to the stage. After the first two minutes I make it to a better vantage point.

To end the set, Twiddle welcomed back John Popper for a healthy dose of 90’s nostalgia and jammed on the Blues Traveler hit “Hook.”

One of the most anticipated sets of the weekend, Oteil and Friends, rotated on stage with a cover of Garcia’s “Run for the Roses.”

Oteil and the crew treated LOCKN’ to another JGB classic, “Cats Under the Stars.” Check out at the 6:45 mark to see how much Oteil is loving Krasno’s guitar work.

The set was billed as Oteil and Friends ft. Bob Weir, but when Bobby plays, he commands the stage. One of Bobby’s orders – sing happy birthday to Oteil!

Bobby left the stage after “Cassidy,” and Oteil welcomed up Dickey Betts’ son Duane Betts to join the band. Oteil switched from the Dead universe to his Allman Brothers Band roots seamlessly with a pair of ABB classics. Watch Duane Betts takes the reins on his dad’s classic “Dreams” and “Jessica.”

By the time Duane was melting faces, I had made my way to the rail and had the pleasure of watching the legendary photographer Jay Blakesberg in action.

As Oteil’s set came to a close, Oteil remarked that he felt like his older brother Kofi was here with us. The band closed with a rocking’ version of the Janis Joplin classic “Another Piece of My Heart.”

Next up on the main stage was the Michigan funk sensation Vulfpeck. Their set was entirely to funky for video footage. Eric Krasno joined them for a quick sit-in and then Antwaun Stanley joined them for a few more.

One of the highlights of the set was seeing Joe Dart go absolutely beast mode on “Beastly” which was reminiscent of the “Beastly” he dropped on LOCKN’ in 2016.

Vulfpeck’s on stage wit was as sharp at their funk. Jack Stratton gave the festival’s “keynote” speech and gives props to LOCKN’ for the ultimate concert set up. And he’s right – the rotating stage is a win win for performers and the fans.

After a brief set break, Saturday’s main dish was served—Tedeschi Trucks Band. Susan’s voice echoed throughout the farm while Derek’s guitar enchanted us for the second time in two nights.

During the first set, TTB delivered a “Midnight in Harlem” with a Derek Trucks solo that will bring you to your knees.

After a brief set break, Trey emerged with Tedeschi Trucks Band for TTB’s first ever recreation of Derek and the Dominos’ album “Layla and Other Assorted Love Songs.” There aren’t enough superlatives to describe this set. As an added bonus, Doyle Bramhall II joined for the set.

If LOCKN has taught me anything it’s that the Wheels of Soul 2020 tour should be Tedeschi Trucks Band, Trey Anastasio Band and Corey Henry and the Funk Apostles.

After seeing Derek, Trey, Susan and Doyle trade licks on classics like “Layla” and “Little Wing,” it’s safe to say this was one of the best sets in LOCKN’ history. Thanks to Relix for the stream of the entire set!

I was too tired to soldier on, but my friend Brian from Deadheadland made it to Garcia’s Forest to capture Soulive with the Infinity Horns. Duane Betts made a special late night appearance for a trip take on the Allman Brothers Band classic “In Memory of Elizabeth Reed.”

What an amazing festival! Sadly, I am heading out before the music ends, but you can catch the rest of the day’s action over at Relix.

Odds and Ends
Total FitBit steps for the day: 30,488
Life saver for the day: Shenandoah Joe
Tee of the Day – Notorious P.I.G. 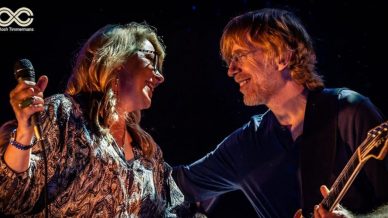