Oteil Burbridge, former Allman Brothers Band bassist and current Dead and Company bassist just release a brand new album and has assembled one hell of a line-up to go on a brief tour with. Dubbed, Oteil Burbridge and Friends, the line-up includes Jay Lane on drums, Eric Krasno on guitar and vocals, John Kadlecik on guitar and vocals, Melvin Seals on organ, Weedie Braimah on percussion and Alfreda Gerald on vocals. Oteil has two weeks of date set with his band before heading back on the road with Dead and Company for a fall tour.

Pretty much all of Oteil’s friends have jammed with members of the Grateful Dead and are more than familiar with the Dead cannon. Oteil kicked off the show with the title track off of his new album, Water in the Desert, then the supergroup started to dig into familiar territory with a cover of “Althea.” With longtime Jerry Garcia Band member Melvin Seals in the line-up, Oteil also covered a lot of JGB favorites like “The Harder They Come” and “How Sweet It Is.”

For good measure Oteil and Friends mixed in some other classics like The Bands “The Weight,” The Meters’ “Just Kissed My Baby” and Janis Joplin’s “Piece of my Heart.”

Thanks to D. Fries for the recording! 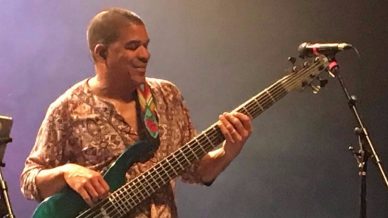 Jam Date: November 2, 2017
Featuring: Alfreda Gerald, Eric Krasno, Jay Lane, John Kadlecik, Melvin Seals, Oteil Burbridge and Friends, Weedie Braimah
Venue: Georgia Theater
Songs: Althea, How Sweet It Is, It Hurts Me Too, Just Kissed My Baby, Leave My Blues At Home, Piece of My Heart, That's What Love will Make You Do, The Harder They Come, The Weight, Unconditional Love, Water in the Desert, What's Become of Mary
Hey-I got something to say!