The North Mississippi Allstars are marching across the US on a massive fall tour schedule that includes gigs from Colorado to Dallas to NYC. They will cross paths with JJ Grey and Mofro, Galactic and the Magpie Salute. One of the most anticipated shows of the fall is NMA’s gig at the Beacon Theater during the Tedeschi Trucks Band’s run. Last night, North Mississippi Allstars brought their gritty brand of swamp blues to Nashville, TN to the outdoor venue Musician’s Corner at Centennial Park.

NMA is out on the road in support of an album they released in the spring titled Prayer for Peace. NMA’s line-up this tour includes Luther Dickinson on guitar and vocals, Cody Dickinson on drums, keyboards, guitar, and vocals, Dominic Davis on bass and Rob Walbourne on drums.

The Allstars plaid tunes from their new albums and plenty of other originals during the show. And of course they busted out a few familiar covers. Among the covers were the Grateful Dead’s “Deep Elem Blues” and Jimi Hendrix’s “Hear My Train A Comin’.” Also, NMA put a few notable teases in the blues standard “Rollin’ And Tumblin'” including “Sunshine of Your Love” and “Spoonful.”

* With Sunshine Of Your Love And Spoonful Teases 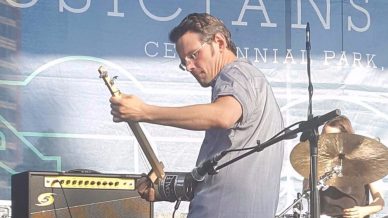