Peakin’ at the Beacon: Watch Tedeschi Trucks Band and Luther Dickinson Play a Blazing 18-minutes “In Memory of Elizabeth Reed” at the Beacon

The opening set was short, but jam-packed. The trio raced through originals and a handful of covers including songs by Jimi Hendrix, the Grateful Dead and T-Bone Walker. Halfway through the set, NMA was joined by vocalists Alecia Chakour, Mike Mattison, & Mark Rivers from Tedeschi Trucks Band to join on a few songs.

For the last two songs of the set, “Deep Elem Blues” and “Mean Old World,” Derek Trucks came out to jam. Luther and Derek jamming together is worth the price of admission alone.

Thanks to taperjoe for the fantastic recording! 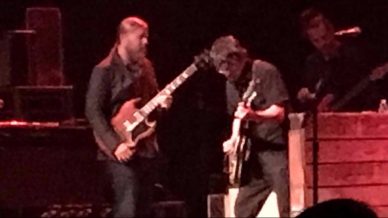