Bobby Weir and Phil Lesh continued their Duo tour in their last stop, Chicago last night. The Chicago Theater is the home to the last two Duo shows.

As we saw starting with Trey joining Bob and Phil at Radio City Music Hall, the Duo is more of a trio, quartet, quintet or with last night a sextet. In addition to Larry Campbell and Teresa Williams who traveled with the Duo from Boston, Dead and Company keyboardist Jeff Chimenti joined the band on the keys.

The highlights include a gorgeous “Looks Like Rain,” a groovy “Estimated Phrophet” and the entire second set with Larry, Teresa and Jeff with the band.

^ – Preceded by a brief anecdote about the song
* – With Jeff Chimenti (!), Larry Campbell and Theresa Williams

Thanks to Jeff Frank for the recording! 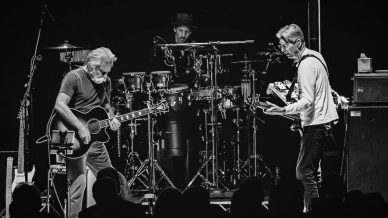