The Golden Gate Wingmen are a Grateful Dead tribute band made up of quite an impressive line-up that have all had their place in the story of the Grateful Dead. The band is lead by Further founding member and former Dark Star Orchestra guitarist, John Kadlecik. Kadlecik is joined by Jay Lane (Further founding member) on drums, Reed Mathis (played with Phil Lesh, Mickey Hart and Bill Kreutzmann) and Jeff Chimenti.

Chimenti for all intents and purposes has been the full-time keyboardist for the Grateful Dead since Jerry passed. He has played with Further, The Other One, The Dead, Bob Weir and Ratdog, at Fare Thee Well and is currently in Dead and Company and Golden Gate Wingmen. To put this into context, Chimenti has played with one or more former Grateful Dead members for over 20 years (he joined Ratdog in May 1997), which is as long as the tenure of Grateful Dead keyboardists Keith Godchaux and Brent Mydland combined.

The Wingmen’s show is not characterized by frenetic jams and peak and melt your face, but rather considered, deliberate grooves and highlight the musical depth and abilities of the four members.

Get lost in the hypnotizing “Eyes of the World” in the second set to get a good flavor of GGW.

Thanks to Keith Litzenberger for the soundboard recording! 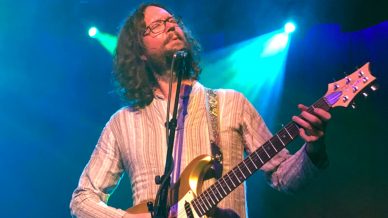