Gov’t Mule, fresh off their Jamaica Island Exodus getaway is hitting the early festival circuit. While the northern U.S. is still in the throws of winter, sunny Florida has already hosted two major festivals this month. A couple of weekends ago Florida was treated to the annual Sunshine Music Festival and this past weekend, the Florida Jazz and Blues Jam hit Boca Raton.

Among the headliners were Gov’t Mule and The Devon Allman Project featuring Duane Betts. Duane Betts made quite a name for himself in 2017 jamming with Mule, Blackberry Smoke, and Devon Allman among other acts.

At the end of a rip-roaring Mule set, Devon Allman, Duane Betts and Pete Levin joined Mule for a blowout “Statesboro Blues.” After everybody had a turn soloing, Warren thanked the crowd and said they were going to end it how they do in New Orleans with everyone playing at the same time. What ensued was two minutes of jamming bliss.

Thanks to Jamgrasss for the recording. 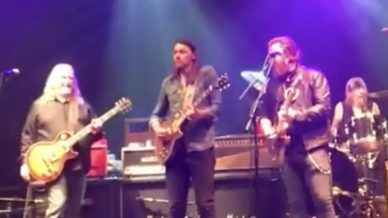