Dead & Company showed that the Dead and their music is still relevant and rockin’ as ever. The latest incarnation of the Grateful Dead features Bob Weir, Mickey Hart, Bill Kruetzmann, Oteil Burbridge, Jeff Chimenti and last, but not least John Mayer filling in for Jerry.

Dead & Company made their debut last fall on the heels of the Grateful Dead 50th year reunion. I was able to catch the Halloween show at Madison Square Garden and in my opinion this was one of the best post-Grateful Dead lineups I have ever heard.

Bob Weir and the gang made their television debut last month of the Tonight Show with Jimmy Fallon. They played three songs in total. The songs had leaked out in drips and drabs on the Jimmy Fallon website, YouTube, etc. SoundCloud hero MWMV Radio posted all three songs from their appearance yesterday.

While the songs are considerably condensed for television, they showcase a band that is tight, lively and reveal that John Mayer & his guitar chops deserve to be in the “company.”

Dead & Company hit the road again this summer including a headlining spot at Bonnaroo where they will perform two sets. 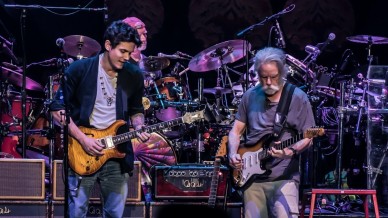