Ann Wilson, from Heart, has some of the best pipes in the rock business and at 67 still sounds pretty damn good. In addition to her original material from Heart, Ann is known for her killer renditions of Zeppelin tunes. She took the opportunity with Gov’t Mule at LOCKN’ to flex some of those Plant-worthy vocals.

After a about half dozen new songs from Mule’s Revolution Come, Revolution Go and some classic tunes like “Game Face” and “Thorazine Shuffle,” Warren welcomed Ann Wilson and they got right to business. “Immigrant Song” and “Black Dog” were right in Ann’s wheelhouse. Next up was the vintage Mule tune “Mother Earth,” before the group launched into Janis Joplin’s “Cry Baby” and then Heart’s “Magic Man.” For good measure, Gov’t Mule ended the set with a rocking version of their classic “Mule.”

Thanks to Daniel Kopp for the recording. 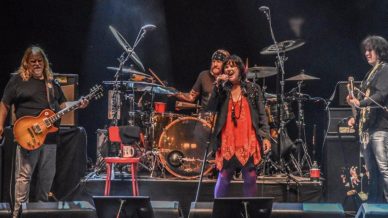