LOCKN’ was filled with interesting collaborations. This year brought us Bob Weir and the Avett Brothers, Gov’t Mule and Ann Wilson, and Jim James with Joe Russo’s Almost Dead. On the final evening of LOCKN’, before Bobby took the stage with the Avett Brothers, Phil Lesh had a whole lot of friends join him for a Phil Lesh and Friends set on the main stage.

One notable guest who was missing was moe. bassist Rob Derhak who is undergoing treatments for cancer. moe. soldiered on at LOCKN’ for their final appearance before an indefinite hiatus. Several musicians on stage including Bob Weir were sporting Rob shirts showing their support for the recovering bassist.

The moe. and Dead mash-up “Silver Sun > The Other One > Silver Sun” featuring the first guest of the set, Grahame Lesh. “Ophelia” featured members of The Revivalists and Bobby joined for the second half of the set with “The Music Never Stopped.”

Thanks to Daniel Kopp for the recording. 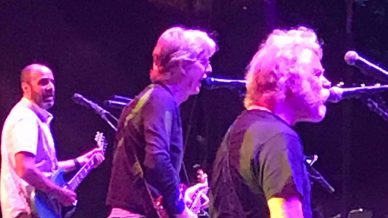