The Allman Brothers are arguably one of the biggest and best bands in rock and roll history. The band’s albums, tours, exploits and feuds are legendary. After 45 years, ABB hung it up for good, but not before kicking off the first annual Peach Festival back in 2012. After losing two of their founding members this year, Butch Trucks and then Gregg Allman, the Peach Festival was the perfect venue for a tribute to the Allman Brothers Band.

While the logistics of ushering guests on and off the stage, may have stolen some time from the 1:45 time slot, the tribute set made it clear that the Allman Brothers Band’s music will live on past both Duane and Gregg and all the original members. The musical genes of ABB’s family is undeniable. From possible the best guitarist of our generation in Derek Trucks to Duane Betts who strikes an eery resemblance to his dad, the music is in good hands.

The emotional tribute had many highlights including the surprise sit-ins from Uncle Warren and Duane Betts. Despite the all-star cast and guest list, an hour and 45 minutes is not nearly enough to honor Gregg and Butch. I’m looking forward the celebrations surrounding the release of Gregg’s final album, Southern Blood.

Thanks to Ted Gakidis for the recording. 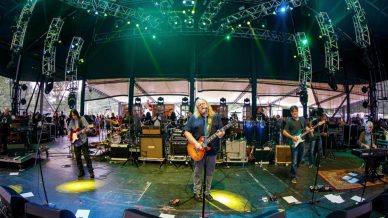