The first selection on the We Will Get By Streaming Tour is from July 1, 1973. While the later shows in ’73 get a lot of attention, this stop at the Universal Amphitheater in Universal City, CA withstands the test of time. Listen for the absolutely sublime “China > Rider” to close out the first set.

The second set kicks off with an enormous 26+ minute “Playing in the Band.” A few songs later, the Dead ease into an early version of “Loose Lucy” which has a much different strut and swagger than later versions. As if the 26+ minute PITB wasn’t heady enough, Jerry and the boys went the distant towards the end of the set with a 21+ minute version of “The Other One.”

Set 1
Mississippi Half Step, Me & My Uncle, Sugaree, The Race is On, Brown Eyed Women, Looks Like Rain, Don’t Ease Me In, Big River, China Cat Sunflower-> I Know You Rider, Around & Around

Set 2
Playin’ In The Band, Row Jimmy, El Paso, Loose Lucy, Truckin’-> The Other One-> Wharf Rat-> Me And Bobby McGee, Casey Jones

Thanks to Charlie Miller for the fantastic soundboard! 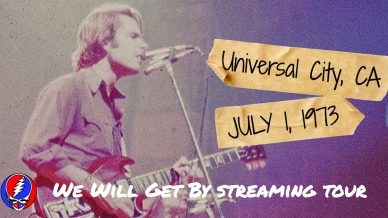 Jam Date: July 1, 1973
Featuring: Grateful Dead
Venue: Universal Ampitheater
Songs: Around and Around, Big River, Brown Eyed Women, Casey Jones, China Cat Sunflower, Don't Ease Me In, El Paso, I Know You Rider, Looks Like Rain, Loose Lucy, Me and Bobby McGee, Me and My Uncle, Mississippi Half-Step Uptown Toodeloo, Playin' In The Band, Row Jimmy, Sugaree, The Other One, The Race Is On, Truckin', Wharf Rat
Hey-I got something to say!