Roger Waters, bassist and founding member of Pink Floyd, is in the second leg of his massive North American tour titled Us and Them. Once over, the tour will have visited 70 cities across North America.

Waters, not one to shy away from sharing his view of politics, has been taking aim at President Trump during his shows. During Pigs (among other), Waters plays in front of a huge screen with images of the Donald with the title “CHARADE.” During “Another Brick in the Wall,” huge block letters read “RESIST.” While Roger crooned on “Us and Them,” powerful images of protests, drones and the wall between Israel and the West Bank rotate on the screens. While the political overtones are powerful, the timeless Pink Floyd catalogue is what really shines during the show.

Waters and his band treated Newark, NJ to dozens of Pink Floyd classics during the show. While the songs may be 40 years or older, they still feel as fresh and relevant as ever.

One of These Days

Speak to Me / Breathe

The Great Gig in the Sky

Another Brick in the Wall

Wish You Were Here

Welcome to the Machine

Vera > Bring the Boys Back Home

Thanks to hellspawn3000 for the excellent HD footage! 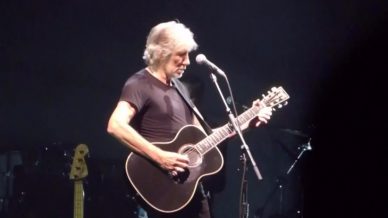 Jam Date: September 7, 2017
Featuring: Roger Waters
Venue: Prudential Center
Songs: Another Brick In The Wall, Brain Damage, Breathe, Bring the Boys Back Home, Comfortably Numb, Eclipse, Money, One of These Days, Pigs (Three Different Ones), Smell the Roses, Speak To Me, The Great Gig in the Sky, Time, Us and Them, Vera, Welcome to the Machine, Wish You Were Here
Hey-I got something to say!